Every day I finished cleaning, storing, sorting, and figuring out how to leave my motor home in storage for six months in the hot desert.  Then the wind was blowing and at night it started raining!  I grabbed everything from outside that would get wet, including my hammock, floor mats, small table, and even the solar lights and chairs.  It was the first rain I had seen in the desert.  But it was better than the dust that had been blowing.  My dog Cheyenne hates the wind, even in Alaska, so she was leaning against my leg all day, or looking up sadly and frightened at me as if I could fix everything.  She’s really a good dog, and loves this traveling life.  I just wish she wouldn’t try to lie under my feet in our small living space, because several times I’ve almost fallen over her.  She’s great during the night, though, and sleeps quietly except when she is having nightmares.  These bad dreams seem much worse since her car accident over a year ago, and I imagine she keeps reliving that horror in her sleep.  She sometimes wakes me up and even when I tell her everything is okay, sometimes she doesn’t stop jerking and whining until I touch her.

The morning after the storm, tumbleweeds were everywhere, even stuck under my motor home and my car.  As I was tidying up, I noticed that I was missing the front right tire cover!  I had laughed earlier at people who had bungie cords stretched around their tire covers, but I wasn’t laughing any more.  I walked around the area several times and even had other RVers helping me, but no luck.  I heard stories from several people about how they’ve had to replace them because of wind, just like me.  Later I saw an old guy in a motorized wheelchair who lives nearby, and asked him to watch for it.  I was surprised when he spun his chair around and pointed out the direction he saw it blowing during the storm.  I said I wish I had known someone saw it, and he said that he had no idea where it came from.  Sure enough, I followed the direction where he pointed, and found it far away, stuck between a cactus and a wall.  Hooray!

I finished spraying 303 Aerospace Lubricant on all the weatherstripping, sliding window frames, the tires of both motor home and car, and even the leather upholstery in the Acura and the dashboards of both rigs.  This stuff is a miracle!  The windows suddenly slid easily, after fighting me these past months.  Everything looks good except for the dirty exteriors left by the wind and rainstorm.  They can stay dirty because there will surely be more storms while I’m gone.  Hopefully having covered storage might help.

It was a hectic last day, cleaning the holding tanks and flushing them thoroughly, getting to the storage yard and doing everything on my final checklist.  I finished just as the shuttle van arrived to take me to the airport, and we got there right on schedule.  BUT – the flight was delayed so I couldn’t make any of my connections, and this was almost two hours after I checked in and got my boarding passes. There was a mechanical problem so the entire flight had to be rebooked, most folks to USAir, but they won’t take big dogs so that was out for us. About fifteen of the passengers got a direct flight to Anchorage, but Alaska Airlines got us a pet-friendly hotel room in Tempe, dinner, and a flight home the next day. It took forever but they did provide some doggie treats for Cheyenne.

It was a good twelve hours after our 3 a.m. start when we finally pulled into my snowy driveway.  The house was fine, we cranked up the heat and turned on the pump, and very soon all my RV traveling life seemed like it might have been a dream.

On the way home we flew over the Grand Canyon… 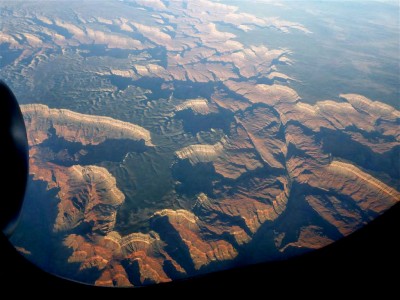 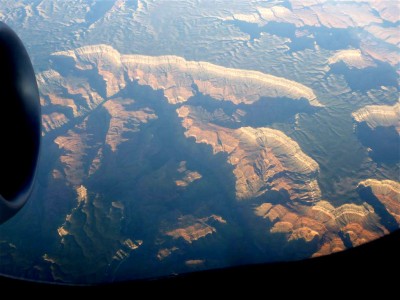 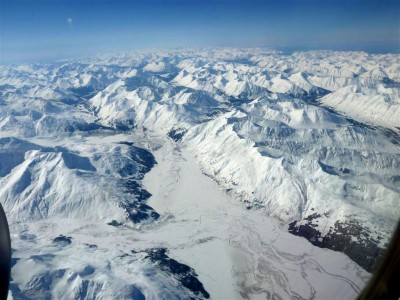 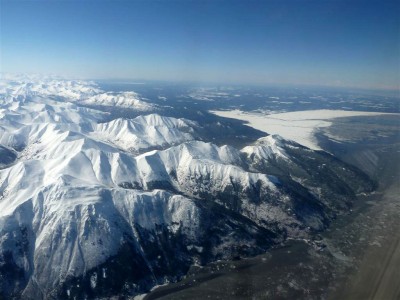 Unbelievably, on the approach to Anchorage, we could see Mt. McKinley in the distance, almost three hundred miles away! 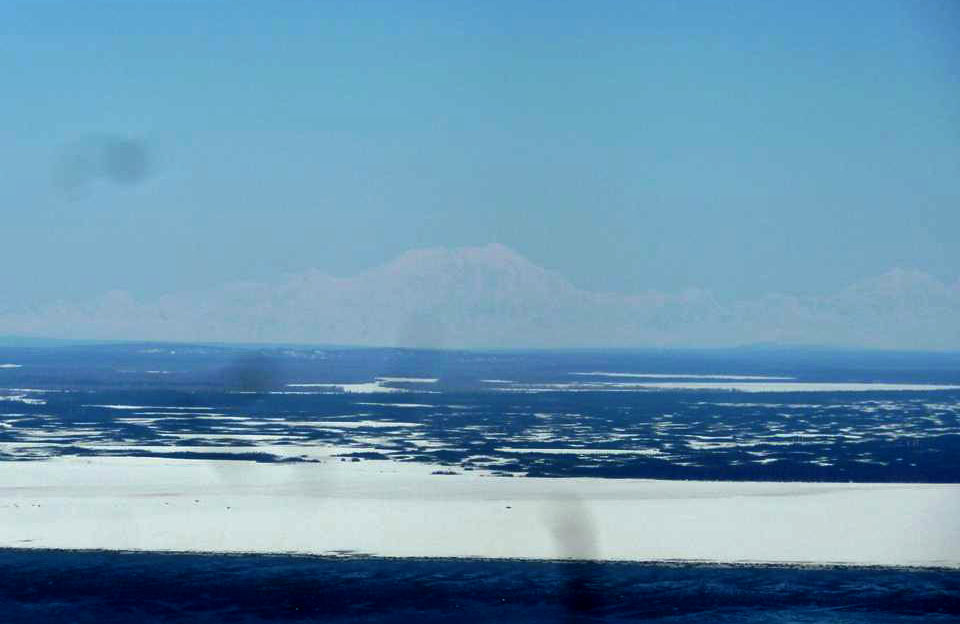 In no time Cheyenne and I were home again, in the snow.  The lake is still completely frozen, and the temperature around 20 degrees.  But there’s sunshine, and it’s SPRING! 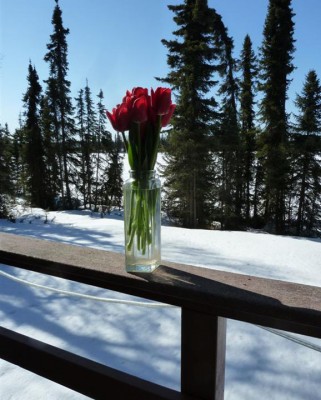 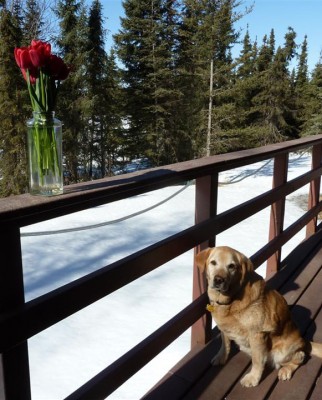 Flash to the Past – 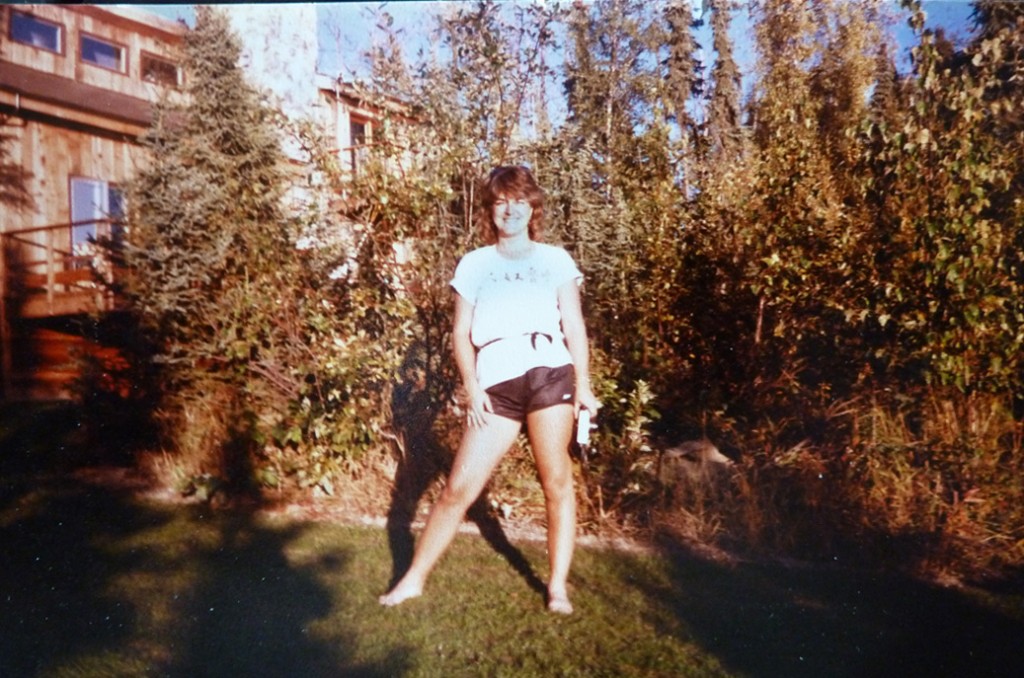 Kristin at 37 years old, with the new house she built to raise her children in style after so many years living in the woods without electricity or running water.

Who knew that this house would remain sanctuary and retreat for thirty years, two decades after the kids were already grown and gone? 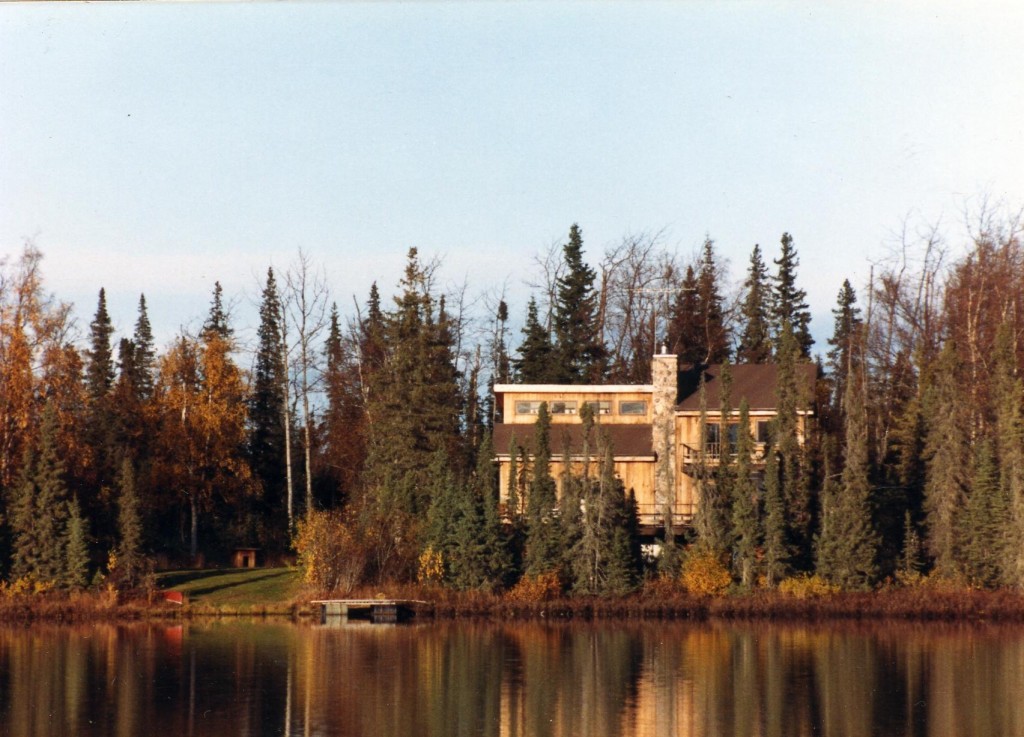 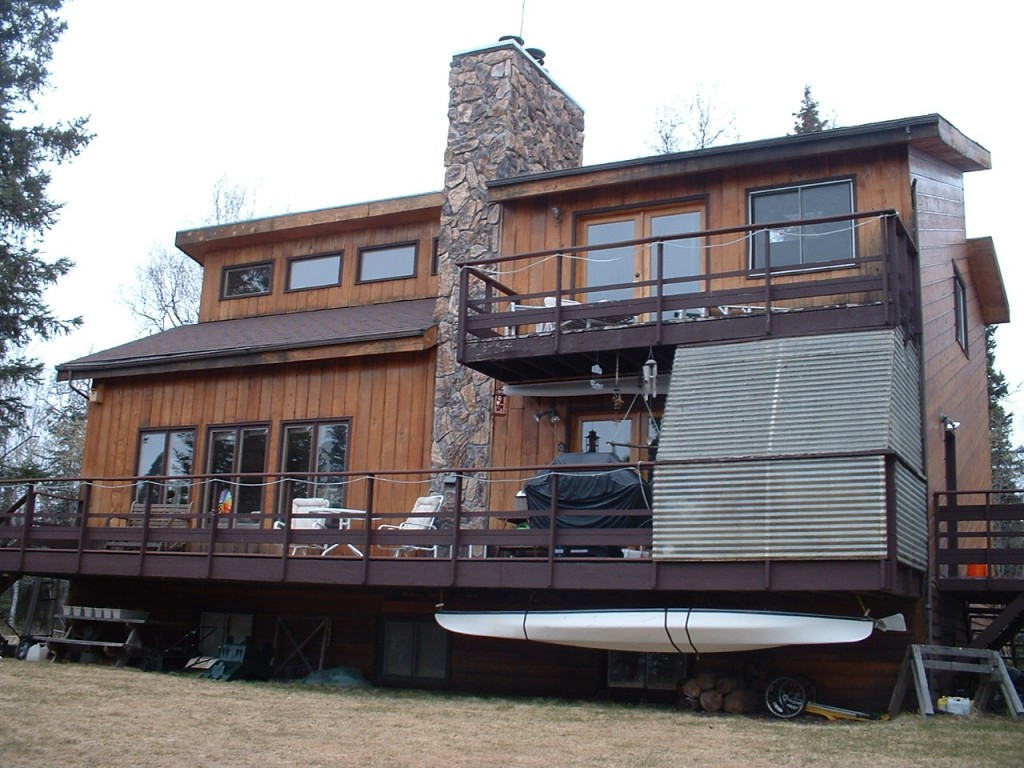 Wrapping it up, saying goodbye

I was pleasantly surprised when I had old friends and new friends come to visit me in my last stop at Casa Grande as I prepare to go back to Alaska.  Back in the 1970s in Cooper Landing my family were friends with Bonnie and Doug Towne when we were raising our small children, who are now in their 40s with grown children of their own.  It was such fun to see them again.  They lived in their motor home for ten years, so it was great to talk about that too. 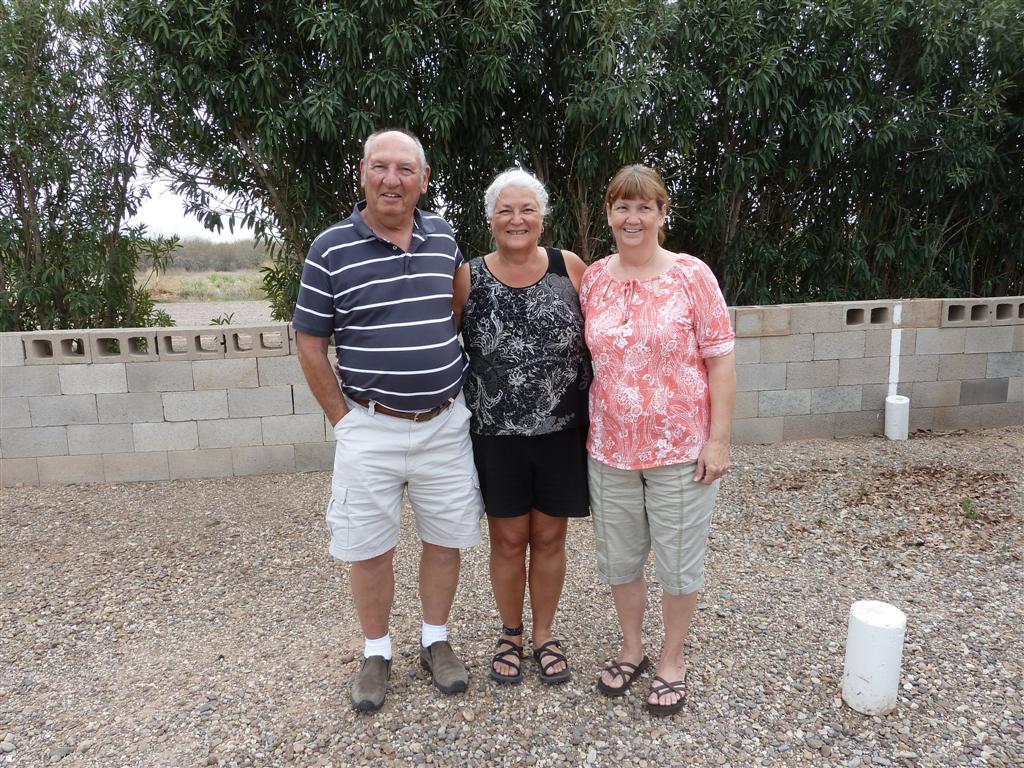 My new friends Candy and Jim from Mexico also came to say goodbye. 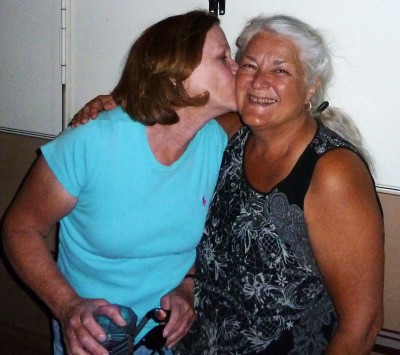 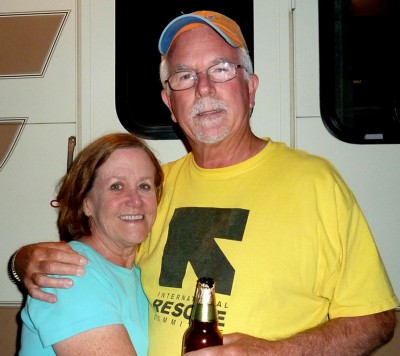 I appreciate the warmth and comfort of the Escapee (SKP) parks for safe camping and the beautiful Arizona sunsets.
Soon I’ll prepare the motor home to spend the summer in this hot desert, returning in the fall to continue traveling.  First stop will be the Albuquerque Hot Air Balloon Fiesta for my 67th birthday! 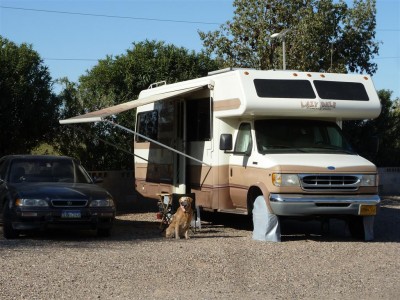 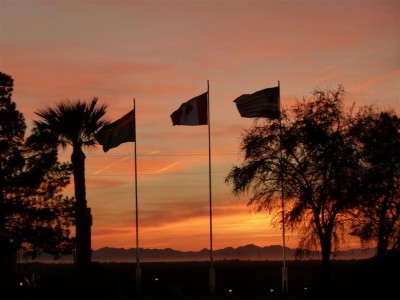 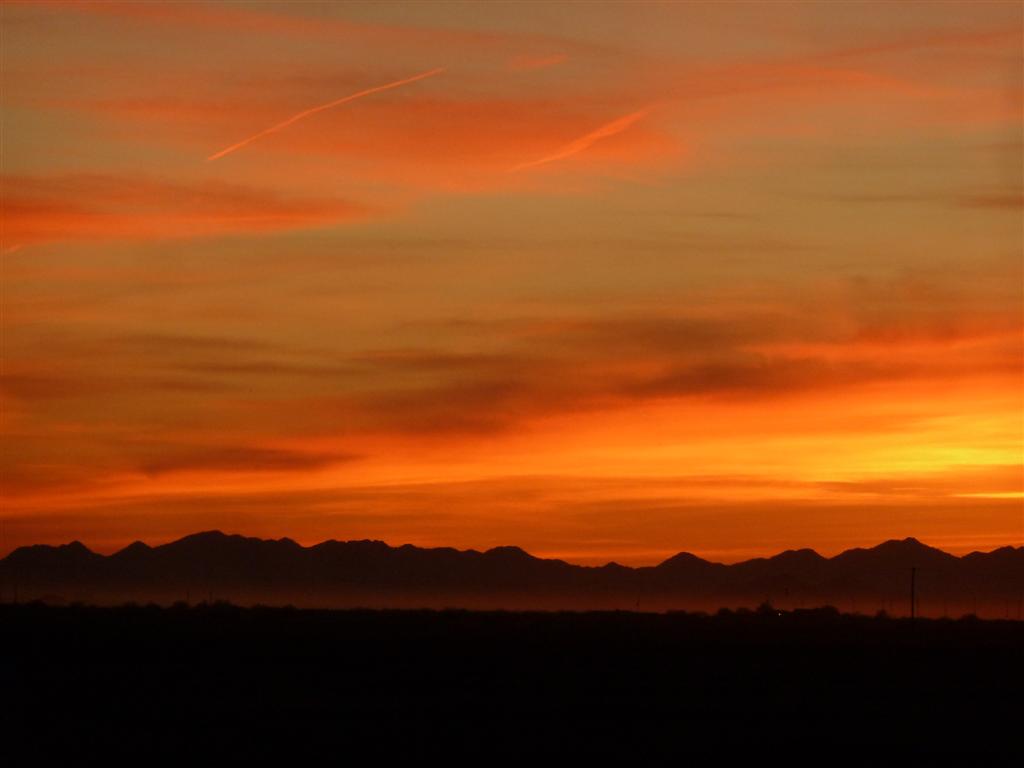