I suffered weeks with no internet because of changes in the service to my Mifi. Now it’s already mid-April and I’m worn out! But the knee is slowly improving and I have a new internet device, so things are looking up. 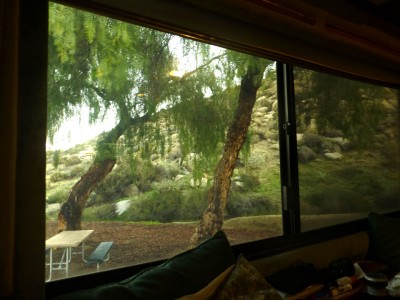 From Jojoba Hills I drove to Morro Bay for the annual gathering of the Lazy Daze forum, mostly traveling around Los Angeles to avoid much of the urban traffic and stopping overnight at the Santa Barbara Elks Lodge. (They had a fantastic salad bar, the best I’ve ever seen.)

Parking at the Santa Barbara Elks – 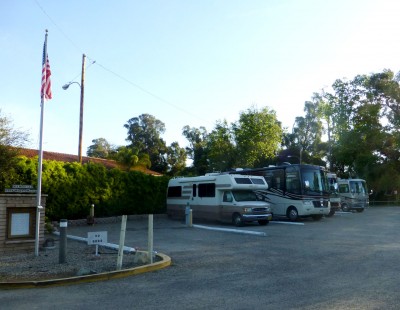 It was a long, tiring drive, but I was delighted to see old and new friends and to learn more about my motor home from the many experts in our group. There were more than 40 Lazy Daze motor homes at this annual get-together. I had not been to Morro Bay since sailing into the harbor in October of 1992 when the fog limited all visibility, and I managed to use the newly developed GPS to navigate directly to the harbor entry buoys. The fog was so thick that it wasn’t possible to even see the huge rock beside the bay, the most distinctive landmark in this coastal area. My friend Andrea was living at a Grover Beach RV park, and she drove up every day to visit me and the rest of the forum members. We have stayed in touch by email for two years and it was great to see her again.  The last day I drove down to see her campsite and we visited the beach nearby.

I enjoyed some long walks in the area with Cheyenne, and attended several group potluck dinners and happy hours. The four days at Morro Bay in the State Park cost more than any other place I stayed all winter. Fortunately I had pre-paid the reservation months earlier, but given the cost of gas and RV travel while towing a car, I probably won’t be attending this gathering again anytime soon. Gas was dearly expensive in Mexico, since they produce all their own fuel and do not participate in international markets that were driving US prices down. But I was surprised that California gas wasn’t much cheaper. Later when I crossed over to Nevada, I was happy to finally see lower fuel prices. 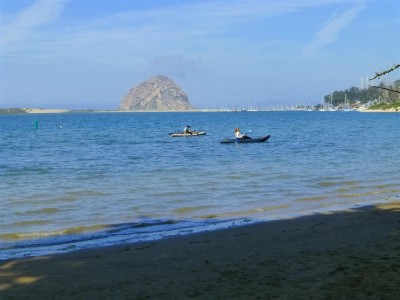 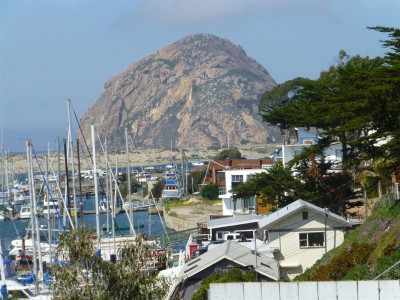 As always, I prefer taking different routes when I travel, so I rarely turn around and go back the same way. This time I drove across California by heading over the hills toward Bakersfield, and crossed Interstate 5 to continue toward Barstow. There wasn’t much traffic over the mountains, except for big trucks and a few other RVs. When I got tired, I stopped at Peggy Sue’s 50s diner and stayed overnight in their huge parking lot. It was surprisingly comfortable and relatively quiet. The next day was a short drive to Pahrump where I joined some WIN members at the Moose Lodge. WIN is “wandering individuals network”, another RV group for solos. I keep being surprised that I rather like Pahrump, but was disappointed with the Elks Lodge there and was happy that the downtown Moose Lodge where I am a member was welcoming and centrally located. Most places it’s the other way around, but the Elks do have a nice RV dump so I used it before I left town.

After a couple days of resting up, I drove an hour around to Hwy 95 to spend a long weekend with my son Grey at Indian Springs 30 miles north of Las Vegas. It is a very small town but has a good school. We had a nice visit, and I was impressed with his huge new shop. His daughter, my granddaughter Lorin, now lives in Las Vegas with her mother, but still commutes to attend high school. She also stayed with us the first night, and played in some softball games the next day as catcher. Her mom and grandma also came with Lorin’s boyfriend to see the game. I arrived on Thursday afternoon so that I could be there for my son’s long weekend. He works four-tens, so Friday is his Saturday, and he took Monday off to work on building dugouts for the girls’ baseball field. We took some drives in the old jeep he’s been rebuilding — I love it! He had many friends bring their vehicles for him to work on over the weekend, and they were happily talking cars, drinking beer and smoking cigarettes every day. I think his life suits him and he’ll probably stay there and hopefully keep healthy for a very long time, especially with the new shop building to keep him busy.  (Maybe drinking less beer and giving up smoking… I can’t stop being a Mom!) 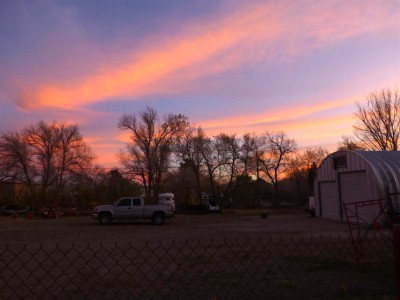 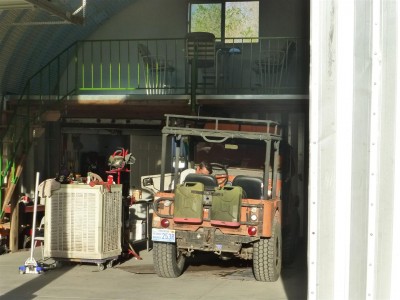 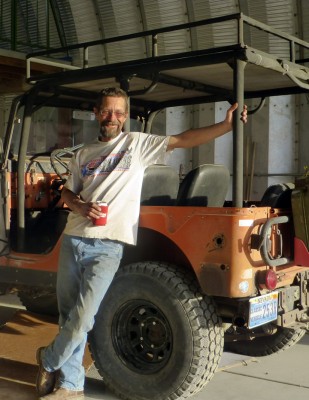 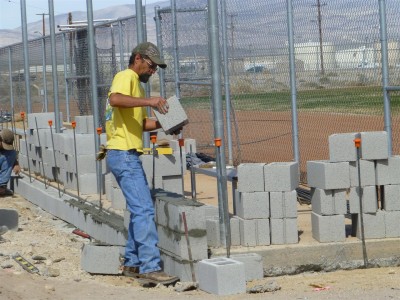 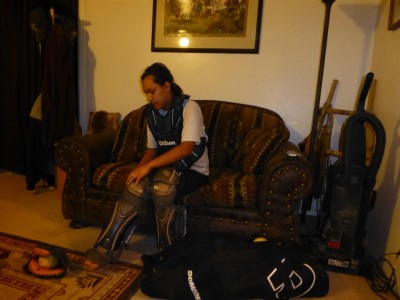 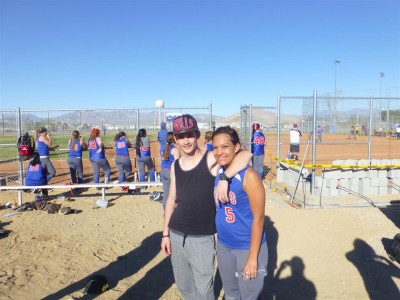 Heading down to Arizona again, I wanted to see some new country, so decided to take the road through Lake Havasu down to Gila Bend.  What a disappointment that was!  The last time I was at Bullhead City, it was a small place across the Colorado River from Laughlin, and although the river and casinos look the same, the Arizona side is completely urbanized.  In fact there is no break in city driving all the way, with stop lights and shopping centers and constant traffic. I will never willingly drive it again.  I stopped at the BLM offices and got information about places to boondock past the lake.  At Mile 174 I turned off the highway to park in a desert area with some other RVs who were obviously staying there a while.  Since I knew I would be leaving I didn’t even unhitch the car.  Unfortunately as I climbed out of the RV without opening the step, I badly twisted my left knee and smashed my poor left big toe, and the resulting pain and damage would haunt me for a long time to come. Thankfully I had an automatic transmission so could only use the driving leg, since I could barely walk. 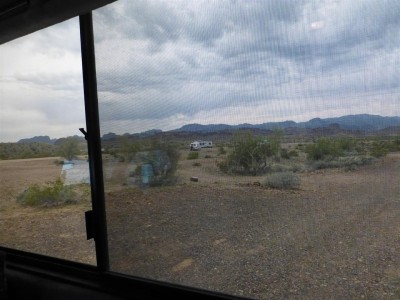 It almost felt like home to pull in to the Casa Grande SKP park and be greeted by my old friends Toni and Charlie. They are the dearest people and I love them!  We enjoyed meals together, visiting and sharing travel tales, with long talks about books and life.  Toni loves the ebooks I put on her little nook reader, and Charlie says I “saved his marriage” by giving her something to read each night.  Toni and I have a sort of book group consisting of just us two, sharing our ideas about the books we read.  He’s in his 90s and she’s in her 80s, but they still travel in their motor home and love to see new places.  They’ve lived all over the world, always daring to have new adventures and collect memories.  Both are as sharp as tacks, smart and funny and wise.  Their budget is very tight, since they spent nearly eveything they had educating and helping their grown children. I always want to share time with them whenever possible. 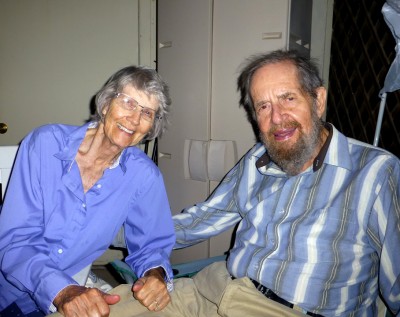 While I was there, one evening the glass cover on my oven door shattered into a thousand pieces!  I was shocked, but soon learned that the oven still works just fine.  A replacement oven costs $1000, so this will still do for a while. 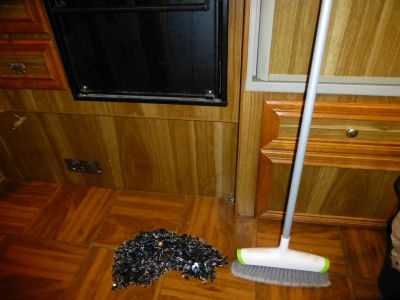 I loved the desert flowers that were blooming all around, and enjoyed slowly limping around the to get pictures of them. 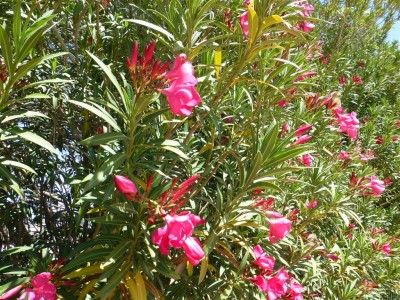 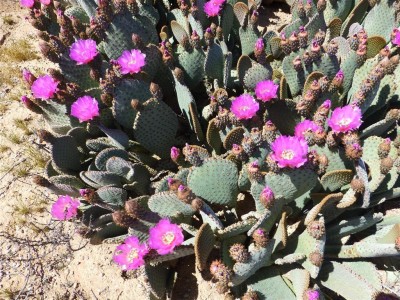 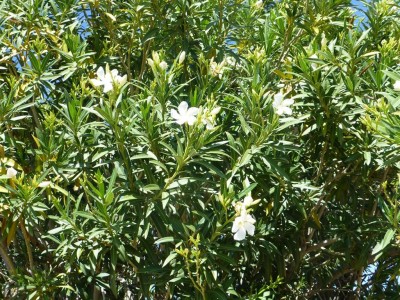 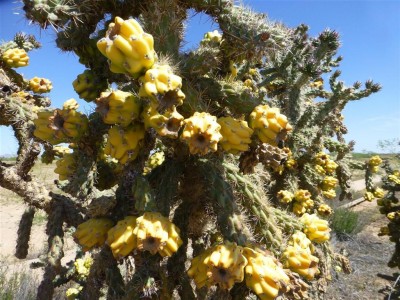 I spent a week dry camping as the daily temperatures continued to climb, trying to rest and let my knee heal. Finally the last night I moved to a site with electricity so I could have air conditioning, vacuum some of the dog hair from the carpets, and flush out the holding tanks in preparation for my return to Alaska. When I left the forecast was for a week of mid-90 degree sunny days. The last day I moved to my storage yard where I could get a little sleep before my airport shuttle arrived at 2 a.m. All my fretting about the awful travel schedule was for nothing because my driver was prompt and helpful and everything went fine. This time the van driver was British Mike, who provides rides all around southern Arizona with his nice minivan and prompt, courteous 24-hour service. phone 602-760-6999. Highly recommended.

Just as the taxi brought me to my house in Soldotna, my friend-housesitter-snowplower-helper Guy drove up! He was going to replace some batteries in smoke and CO detector alarms that had been chirping in my house. It was great to see him, and to know my house is still fine. I had been disappointed flying in to the Anchorage airport to see lots of frozen ground and some snow piles around the runway. So I wasn’t surprised that my lake was still frozen and I had snow around the edges of my lawn. I was very surprised when it started snowing a few days later, though. Breakup is always unpredictable in Alaska, but April is guaranteed to be mostly nasty and I always wonder why I am here to see it. So much for spring flowers or nice sunny weather. There’s really no spring, it just turns green almost overnight in May! After being home for three weeks, I experienced only two days with sunshine. Mostly I was delighted that my Subaru started right up and so did my Dodge 4WD pickup. I’ve taken my old friend Irene around to run errands and go to lunch at the local senior centers and other places. My left knee still hurts, and the right one often does too. It couldn’t be old age! I’m not even 70 years old yet, although some days it sure feels like it. Mostly I seem to be about mid-40s, so am surprised when I look in the mirror and see my grandmother Elsie.

I have renewed the MLS listing for the house, plugged the refrigerator back in and bought groceries, fought with the internet company, and am trying to take on the huge task of transcribing decades worth of old journals. So many people have asked for stories of homesteading days, raising kids in the “woods” off the grid, sailing the blue seas, and sharing what I’ve learned from those varied stages of my life that I think I should try to “find my old self” somewhere in there and see if I can do some writing to pull it all together. I was shocked to see that I had packed up so much stuff that I have to search to find things to cook with or clothes to wear. The house is very quiet and almost empty, the only “project” equipment I have left are my sewing machine and laptop computer. Fortunately I still have a desk and a chair so I can work. Heaven knows, the weather isn’t conducive to long walks, and besides my knees hurt, both of them!

I’m grateful that my grown children are busy and all the grandkids seem to be healthy, and although their lives are very complicated, they sure don’t need me to do anything for them. I’m glad my son Peter has been calling often from Munich, and I can talk with my German grandchildren to feel like I have family. But the empty house almost echoes and I feel like my mind is already far away. .

Here we go!  April in Alaska – 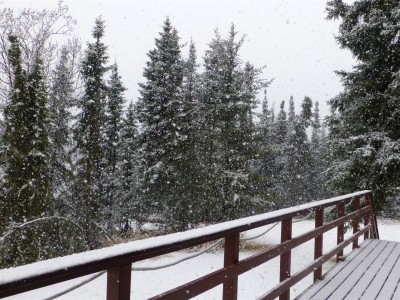 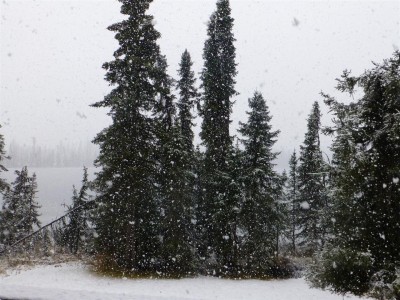