I loved the drive down the coast of California, all the way to Half Moon Bay.  The entire trip is so beautiful all the way!  I found out that with the America’s Cup elimination races and the Blue Angels flying over, downtown SF was a crazy mess.  I learned this because along the way I stopped to buy some oysters,.  As I got out of my car, the three young people walking by stopped because the tall young man had noticed my Alaska license plates and asked me if I was really from Alaska.  When I said yes, he asked what part?  It turned out that his father Mike is a doctor I know well, and he and his wife Joan are good friends of mine!  I have belonged to a book group with them for some 17 years, and have actually met Kirk and his partner when they visited my city, even shared Thanksgiving dinner with them one year!  What a shock this was, it truly is a small world!  They told me I should avoid the downtown, to cross the bay further south to get to my friends’ house.  So I cut across to the East Bay on the San Mateo Bridge.  I was a little surprised to see the huge pumpkin farms at Half Moon Bay!  It was about two weeks before Halloween, and apparently most families make a trip to buy pumpkins like they go out to cut Christmas trees in other parts of the country.

I did make it to Gloria and Sonny’s house, although I had only been there once before.  They were very surprised that I could find their townhouse and even park at their back door.  I met this couple in Romania when we were both serving as “over 50″ volunteers for 2 1/2 years from 2007-2009.  We traveled together through Hungary, rural Romania, the Danube Delta, and later in Italy.  More recently Gloria has accompanied me on other travels around the West, both by car and by train.  Even though we inevitably bicker sometimes, we happily travel together anyway.  On this trip she will join me on the drive down the California coast and spend two weeks with me in northern Baja condos.  But she had insisted that I arrive in time to celebrate my 66th birthday with them.  The townhouse isn’t very large but it is a happy household.  Their married daughter Mia lives with them now, with her husband Brian and small daughter Amihan, so that Gloria can babysit while they work and save money for their own apartment.  Since Sonny returned from Eastern Europe he has had health issues and doesn’t travel often, but Gloria still likes to travel with me when she can.

Sonny and I both enjoy cooking, and since he is a wonderful Filipino cook, we shared his kitchen to fix yummy meals during my visit.  I fixed the fresh oysters four ways:  fresh raw, fried, oysters rockefeller, and oysters bienville.  It was a feast that we all enjoyed. 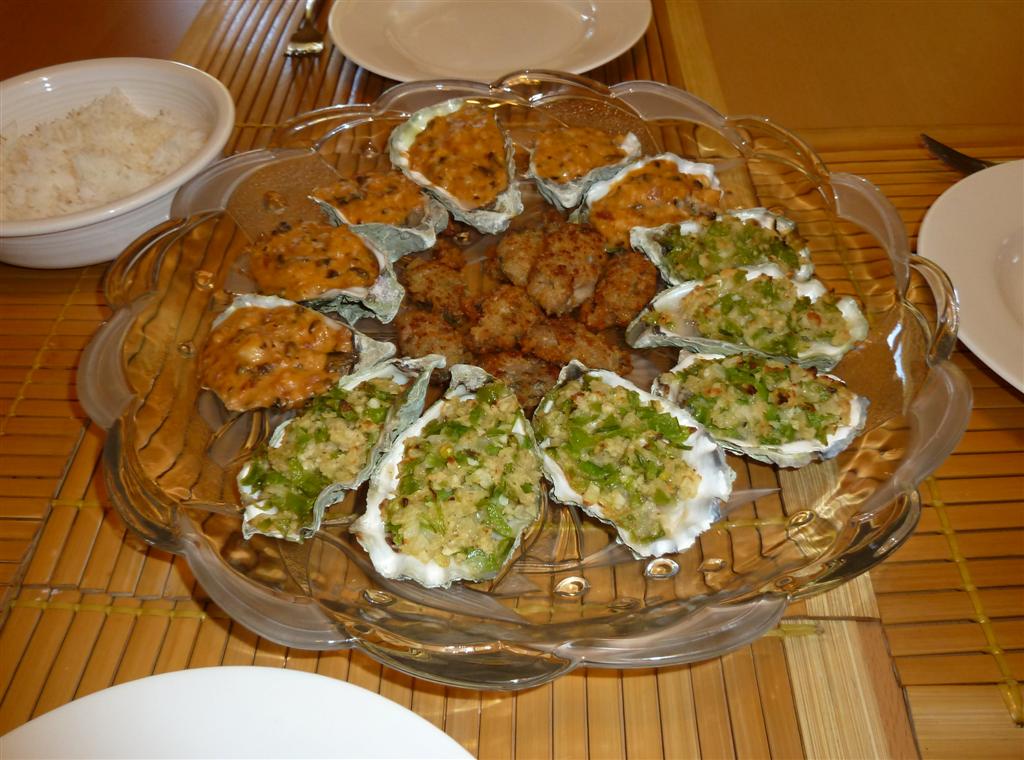 But the biggest surprise was yet to come!  They had planned a surprise birthday dinner with other friends.  It was absolutely lovely, and the food was wonderful.  Some of the dishes are shown in this journal entry.  These wonderful people belong to a Filipino group who are mostly from Sonny’s home village, and they often gather for fun, food, and to prepare donations to send to the poor villagers back in the Islands.  Of course I go along to take pictures. 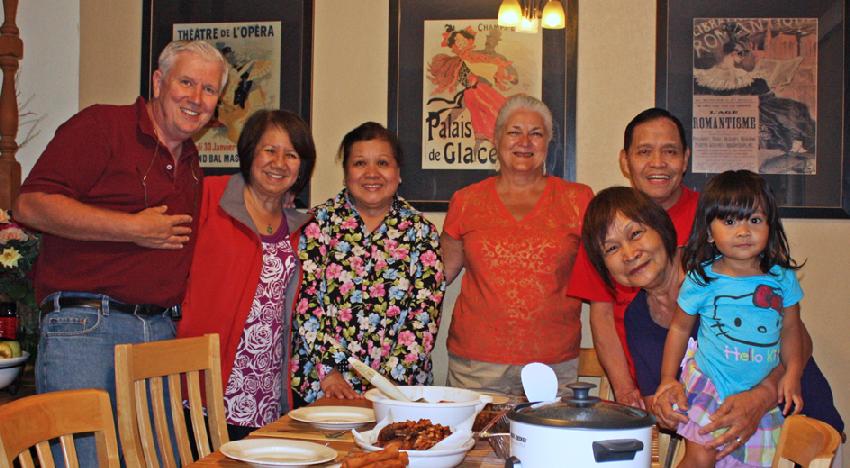 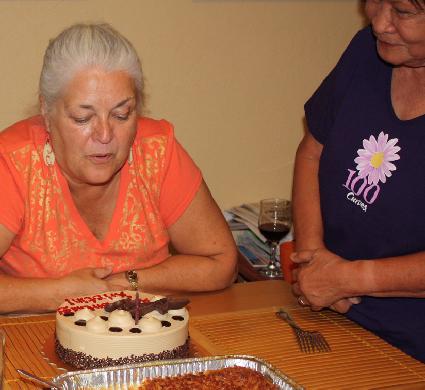 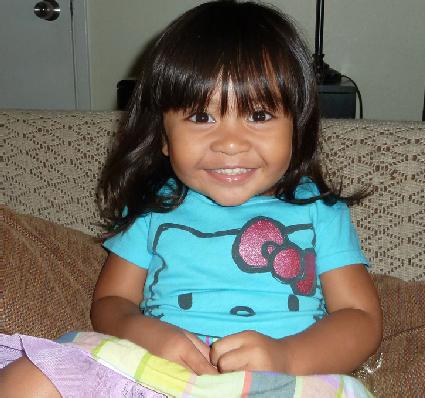 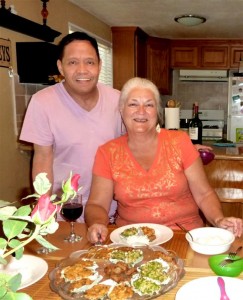 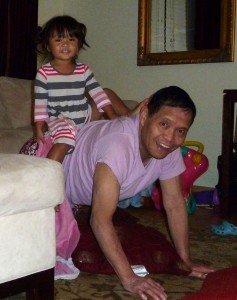 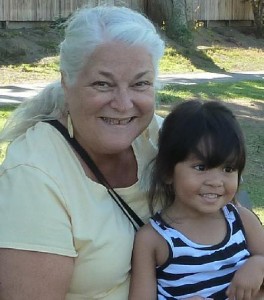 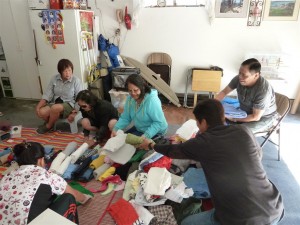 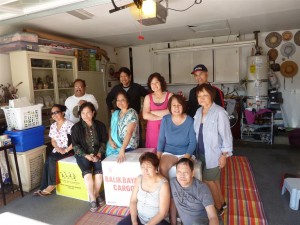 After a few days it was time for Gloria and I to head back to the coast and start driving south again. We were excited!

While in San Francisco, I went to visit a new friend who also served as a Returned Peace Corps Volunteer decades ago.  Diane will be traveling with the new RPCV travel group to volunteer in Guatemala next March.  I wanted to go with this group, but really can’t afford to do it.  She and her husband have lived at Stanford for over 40 years, and she gave us the full tour of the campus.  It was a lovely afternoon, and I can’t wait to hear all about her trip next spring. 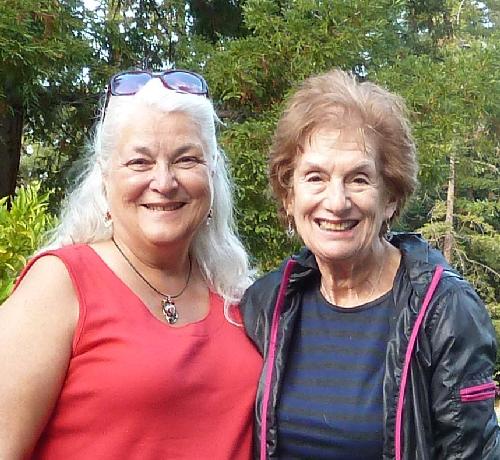 This is Week 5 of a two and a half month long road trip around the West Coast, in Fort Bragg-Mendocino, California

SLIDESHOWS ON THIS PAGE!
It will probably be easier to just watch one of them at a time. I’m still learning this program, so let me know if it might not work for you!

Soon after crossing the border into California, I ran across this herd of elk, with a grouchy and bossy bull in charge of his harem of cows.  This guy was pissed off, he was tearing up the grass, and running after cows who tried to leave.  I’ll bet you can tell where I decided to jump back into my car as he was coming right at me!  Yikes!

Then I headed into the redwoods, which I always love, and to stay near the seashore I took the twisty Highway 1 over to the Pacific Ocean.

And finally I arrived at Fort Bragg-Mendocino, where I had a lovely little cabin reserved for a few days.  This is a beautiful, interesting area to visit.  While I was there I attended a Rotary Club meeting, and the speakers talked about the problem of marijuana “gardens” and cleaning up the toxic waste that these gardens leave.  One was a widow of a volunteer who was killed last year by some of the illegal “gardeners”.  I learned that the U.S. Government provides no funds whatever to do this cleanup, it all must be funded by the Lumber Companies who have the rights to log on the land.  Very interesting!  (Especially since I found “herbs” drying in the oven of my cabin when I decided to bake in it – I informed the landlady and left them on top of the refrigerator.  Only later I figured out that… well, you figure it out.)