I was so ready to get on the road again!  Alaska weather had warmed up in January which means the snow was melting and then it started raining, with the result that everyplace outdoors became a glare of ice.  People were worried about falling down and it was easier to stay inside and watch the snow melting and then the ice being frozen solid again every morning.  I looked forward to camping somewhere warm, in the sunshine, meeting old and new friends, and traveling with my dog again.

Since I am determined to downsize my life and get rid of possessions, I had told my son Grey that I would try to bring my last two rifles with me on the plane.  It’s been a long time since I checked a firearm as baggage, and as it turned out some of the information I got from the airlines wasn’t exactly what TSA required.  There was a scary half-hour while checking in at Kenai, since the agent decided I would need two more padlocks on the hard case before they would take it.  Fortunately the kindest cab driver in the world was at the airport and she raced over to Walmart, ran in and spent her own money to get two little luggage locks and sped back to the airport to deliver them to me in time to get everything onto the plane!  I had to claim the gun case and re-check it with TSA in Anchorage, but there was no problem.  At no time did anybody even open the case to inspect anything, which surprised me.

After that excitement, surviving the stress and then the relief, the flight down to Las Vegas was good, and I was surprised to fly directly over the long stretches of Nevada desert for the first time, to see how empty it all looks from the air.  I enjoyed spending a couple of nights with Grey before driving my car back to Blythe to pick up the motor home.  We needed my new Christmas air compressor to put air in both driver’s side tires on the Acura, and it worked slow but did the job just fine.  Nearly two weeks later there have been no more leaks.  My Lazy Daze “home” seemed okay after being parked for a month, and I made it to Quartzsite just after noon on Tuesday after stopping at the Arizona border to get gas. I was delighted to find that Grey was right, the generator had no problem starting up as soon as I had more than a quarter tank of gas in the motor home engine.  So I have learned something new again.

There were more than 20 Lazy Dazes at our parking area on the BLM land at the long term visitors area (LTVA) where we pay $40 for 14 days.  There had been as many as 35 rigs during the past two weeks, but I was somewhat late getting there.  Our site is very convenient, only about a mile from the middle of town and the Big Tent RV Show.  Our friend Kathy had experienced a terrifying disaster when her towed vehicle brakes had been partially locked, so the tread tore off its front tires, the brake lines got destroyed, and she was lucky not to have the whole thing burn up on the highway!  As a result many of the RV owners were buying and installing tire pressure monitoring systems (TPMS).  Another woman in our group had her grey water tank actually fall off on the road!  So everyone was also busy tightening all the bolts under their rigs.  These are only two of the many improvements and maintenance items that were discussed at the afternoon Happy Hours and evening campfires.

I hurried over to the “Boomerville” camp the day after my arrival, to attend their busy day of activities.  I had joined the Boomers a year ago, but this was the first time I visited their group, and it was really a fun day.  They had a bread-baking contest (yummy!), a presentation from “Mac the Fire Guy” that included an actual demonstration escape from an RV, and then a slideshow and discussion of RVing in Europe.  I was especially interested to hear Joyce and Larry Space talk about their motor home travels around Scandinavia, through Norway, Sweden, and Finland.  Their pictures were inspiring and it was great to hear how they designed their travel van and then shipped it overseas.  What nice people!

During the week, I also visited some of the “solo” groups of single RVers — the SKP Solos, the WINs (wandering individuals network), and the LOWs (loners on wheels).  As my friend Andrea says, I haven’t exactly found my “RVing Tribe” yet, but it’s nice to know groups with whom you can camp, travel, and visit.  I particularly enjoy the gatherings of the Lazy Daze group, always see people I know, meet new friends, and learn more about my own motor home.  It’s fun to see the improvements that have been made for new ideas, and to learn how different models compare. 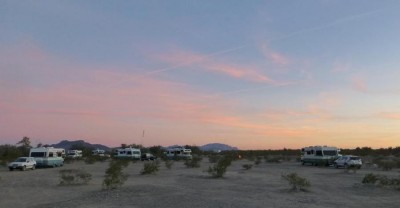 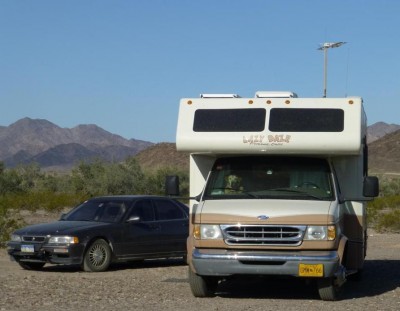 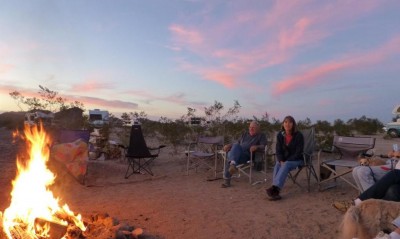 While in “Q” I met the infamous Naked Bookseller, Paul Winer, and attended his boogie-woogie and blues concert at the community center.  Paul is a lifelong nudist and has run a bookstore in this town for more than 20 years.  He does wear a little g-string pouch, as agreed with the city, but was dressed for the concert and changed outfits several times.  It was quite fun and entertaining. 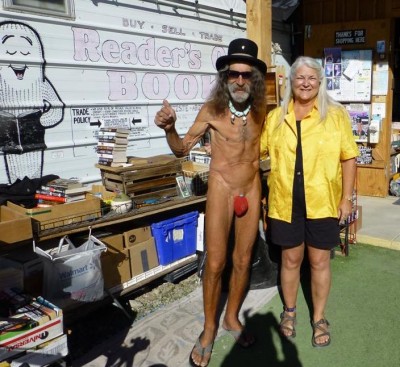 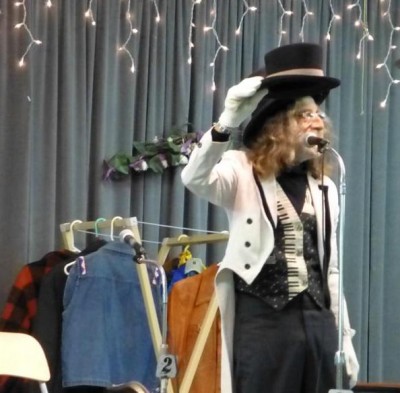 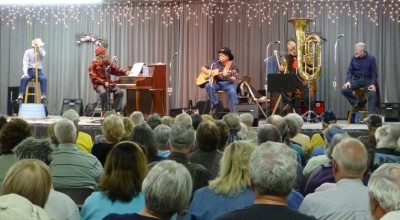 Another day I went with the Solos group out to the completely off-the-grid Desert Bar, about 50 miles away past the city of Parker in the hills above the Colorado River on a really terrible road.  The bar is big, runs completely on solar power, is open only on weekends, and has good food with live music and dancing. Another fun adventure! 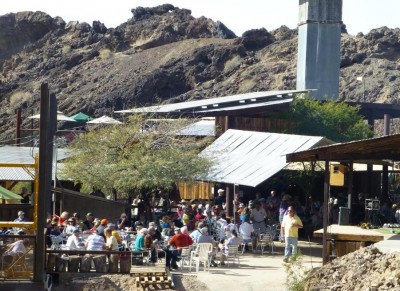 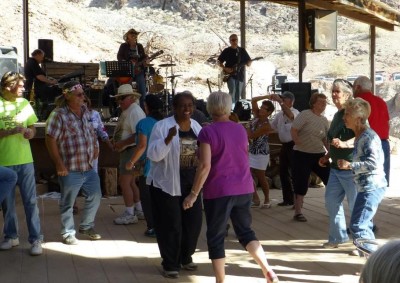 I have especially enjoyed these last days with the few people who have stayed until everyone else was gone.  It’s quieter and more personal, easy to be sociable or not, and to have more time to get to know each other.  I like to collect pictures of solo women hooking up their tow rigs, and will eventually put an album online.  Here is my friend Kathy with her complicated hookup system, and us together in front of my motor home. 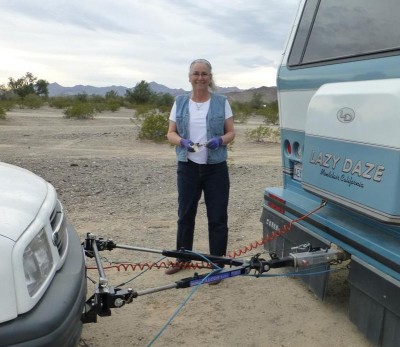 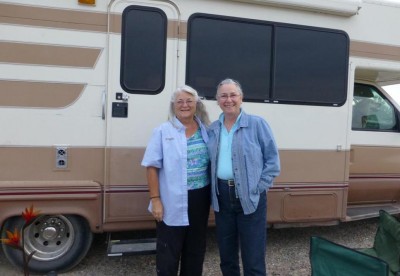 My next stop will be just two hours away at Gila Bend, for the big RVers installation to their Elks Lodge, then to Casa Grande to meet up again with Shar, my friend from Seward for the Gourd show.  After that I plan to go to the Lake Havasu “Winter Blast” pyrotechnic fireworks show with the Boomers.  I adore fireworks, so this will be amazing!