I’m sore and tired and am definitely feeling my age! But I finished emptying the old 1962 Airstream trailer so I can sell it (another dream faded because I never got it all rebuilt). I also emptied two huge legal file cabinets to sell. Both trailer and files are big and heavy, will help gradually lighten my load. Good thing I got the truck fixed so I can make trips to the dump and charity shops.

To tell the truth I hate selling things, and I wonder how I made a living in real estate. I probably made more money buying and selling property for myself, anyway. I worked my ass off and managed to support three children, build a nice home where I could raise them, and also help develop a better community by serving in public office for a decade and a half. After spending their early years “in the woods” in a cabin without electricity or running water, I finally escaped from their father, but felt I had to prove that I could provide for them alone, in style. I did it, but got worn down.

My children and I love my wonderful Alaskan house, on the lake where I was raised as a homestead daughter. But somehow it created an obligation for me to stay here after the kids grew up and left. I have gotten away — sailing in my 40s, to Barrow for work to finish my retirement in my 50s, and to the Peace Corps in my 60s. But not really free. Traveling in a motor home showed me what that is, and I want more. (Yes, I do repeat myself when my thoughts keep circling the drain.)

The exciting news is that my friends Gloria and Sonny are coming from San Francisco to visit me in Alaska! They will be here in two weeks, for two weeks. I told them to come soon, before I sell the house, and before my son and grandson arrive. So we’ll go to Homer, Seward, and maybe drive up to Anchorage when they leave. I’m sending the universe good thoughts for warm, sunny weather. I’ll take lots of pictures.

I caught a cold on top of my usual sinus problems, so I am like that commercial where they say “Do you stash tissues like a squirrel hides nuts?” I notice bony knobs at my finger joints to match the ones on my big toes, osteoarthritis that seems to be spreading from my knees. I wish we could be warned about these things age will bring us, so they’re not such a surprise. In fact maybe we wouldn’t spend so much time accumulating stuff if we knew we’d be trying to get rid of it later.

Here is the trailer, with beautiful Brazilian cherrywood floor.

Okay, two weeks have passed, and a couple hours ago it was snowing – again!  There’s still some ice on the lake, but this afternoon I heard a loon cry.  Hooray!  I don’t know if it is crying from joy at being back home on my Alaskan lake, or crying because there’s still ice out there.  I’ve always wondered how they know exactly the day the lake opens so they can move in and take it over again.  But having watched their ferocious territorial protection through the decades, I know they intend to be the first birds here.  Last year a Common Loon showed up early, like in the days of my youth, but this one must have been a teenager looking for a pond of his own, because soon the now-resident Pacific Loons arrived and the chase was on for over an hour, that smaller Pacific daddy never rested until the challenger took off.  As I’m typing, I can hear a duck too, but I know it won’t be around long since loons hate ducks and won’t allow them to stay.  Loons can be very deadly to unwelcome waterfowl, in fact my Aunt Pat still hates them for skewering her pet ducks by coming up from under like a torpedo, long bill going right through those fluffy quacking bodies. 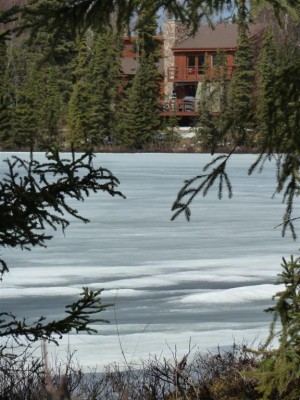 That’s a rough story to begin an entry, but it’s been a difficult month for everyone, waiting for the latest spring in Southcentral Alaskan history, after the biggest recorded winter snowfall.  Who knew when I left the hot days of Arizona spring that I would return to another entire month of winter?  Enough already.  Maybe we’ll finally have robins and the grass can turn green, leaves open on the trees and something besides new rhubarb poke up through the ground.  I’m complaining even though I was gone for part of the winter!  I think of all the many years that I never escaped from winter at all. 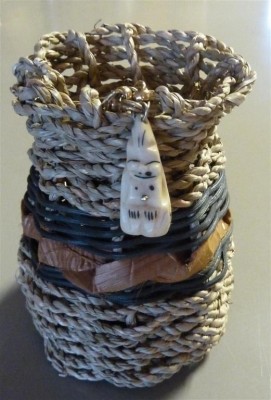 My friend Shar came over again from Seward, and we had a fun day.  She taught me to make a basket, here is my first creation.  I made another by myself this week, just for practice.  Since we both miss RV life on the road, in the evening we watched the only two motor home related movies I could find, Lucille Ball’s Long, Long Trailer and Robin Williams’ RV.  It was great to laugh together, munch popcorn and forget the non-spring outdoors.

By the way, before you ask, the ivory charm on the basket is an Eskimo-carved Billiken from the 50s, one of several I’ve had stashed away for many years.

This week I went to Kenai to help with appropriations to the area Senior Centers for United Way.  Each of the six applying centers came in to make their presentations, then our committee had to decide how much of the available money would go to each one.  Of course they all asked for far more money than we had to give out.  One of the women who came was someone I knew decades ago in my early real estate days.  She lives in senior housing and teaches oil painting at a nearby senior center twice a week, so I think I might go sit in on a class.

I attended a “car care” class sponsored by the Extension Service and put on by my favorite auto shop.  This free program is called “Neighbor to Neighbor” and I think it’s a great idea to have local people share expertise with others in the community.  All their mechanics stayed after closing hours to talk to the group (unsurprisingly all women).  We each brought in our cars to learn about them, so I had the Subaru.  As I expected from exaggerated recent bouncing on road dips, my front shocks are shot and some other stuff.  But nothing critical and the car will drive just fine until I can afford to fix them.

The next day was an adventure that I can laugh about, now that it’s over.  I finally called AAA to get air put in the truck’s flat tire and had it started, drove to town and visited an old friend while I let it run, then on the way home the truck coughed a couple of times and died just as I pulled up to a major intersection. Dead in the street. What a helpless feeling… but funny, too. Even in the moment I could see the humor of it.  Several people stopped and I used someone’s cell phone to call the tow truck guy who had just helped me with the tire, so he quickly came to tow the truck (thanks, AAA) to the repair shop where I attended the class the night before.  He even gave me a ride home first. Nice guy. The repair shop replaced the alternator, battery and serpentine belt, but say the truck is in good shape otherwise. Cost: $620.  If I had a piggy bank, I would have had to break it to pay the bill.

After a lifetime of changing over winter and summer tires every spring and fall, I decided to have the studs taken out of the Subaru tires.  Now I’ll just leave these on all year. Thankfully both vehicles are done for spring now, so I can take them off my To Do List. 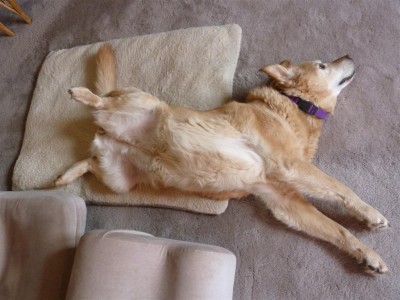 You can see from this picture of Cheyenne how boring it’s been lately… too nasty to even go for walks, but I promised her that I’ll make up for it soon. 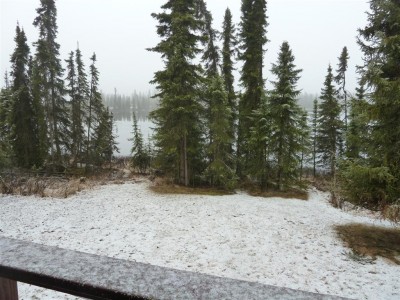 I woke up early today and was surprised that the rain I heard most of the night was finally quiet.
Then I looked outside to see this snow, in the middle of May! Sheesh!